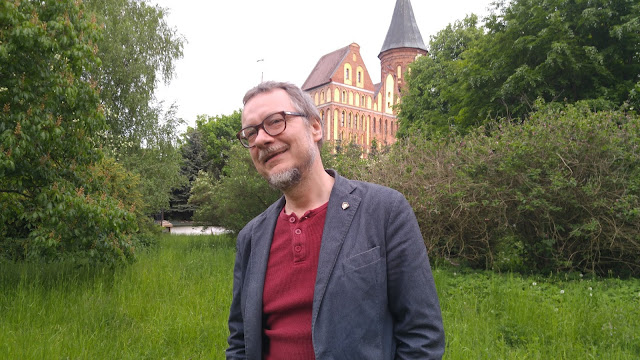 As of 18 May 2016 I am no longer an employee of the Non-Profit Partnership “Urban Planning Bureau “Heart of the City”.

On the one hand, this is a sad outcome. After receiving a carte blanche from Nikolay Tsukanov in 2012, Svetlana Sivkova, Oleg Vasjutin and I drafted the first Road Map for the project. In April 2013, I created this bureau; together with Olga Mezey I elaborated an agenda and the workflow for our future activities.  A team was created and I am proud of this team that managed to do the things that seemed impossible in 2012.
I would like to thank everybody who helped us and who believed us during these four years – you are many and there were more of you each year. I am talking about the Kaliningrad branch of the Union of Architects of Russia, the head of the Museum of the World Ocean Svetlana Sivkova and many, many others – thank you for your support! This trust gives me the confidence that cancelling the results of two international competitions is unlikely to happen. During all these years, we worked in the most transparent way and informed all stakeholders of our actions and intentions. For me, personally, the level of publicity that we have achieved in the bureau is a sample of the modern civil society.
The project went through three phases: “that can’t be true – there is something in it – tell us something new! We have the fourth phase now –”let me run the show”. Therefore, the fact of changing the course is entirely logical: the ideas of the team that has been built over the years proved to be no longer satisfactory for politicians. Now, their motifs regarding the future of the King’s Mountain will re-manifest themselves. It will be possible to treat them fully, without any reservations and hidden hints. Anyway, we have a new phase of the “Heart of the City” ahead of us and the Investor will play an important role in this phase. I think that several months will be enough to understand the new team’s style, the course of action and the system of decision-making.
We “unspelled” the King’s Mountain in these four years. Now, it becomes inhabited with what always inhabits palaces and castles: intrigues, gossips, the sheen of the tomorrow’s gold, amber rooms, secular shows, balls and rendezvous … Life comes to the previously “dumb”, abandoned area. It is up to us what the next step will be and what kind of life it will be.
Over four years, since the times of the Historic and cultural study, the scope of the project has expanded to such an extent, aggregated such a wide range of interests (directly or indirectly participating in the project) and developed such an exclusive contents that it is no longer limited to the Bureau’s work. The bureau “Heart of the City” is one of the instruments of the same-name project but not the only one.
This is why I do not bid you farewell – until we meet again!

Alexander Popadin
one of the initiators of the “Heart of the City” project,